Creating a Season During a Pandemic

By now you may have seen that Marble City Opera has announced our upcoming season! I am so excited about the selections we have to offer with an audience this year, beginning with our postponement of I Pagalicci in August and ending with Tosca next June, we have an exciting lineup.

Since the pandemic began in March I have been researching technology, looking into ways to bring opera to a virtual audience, as well as putting procedures into place to bring artists and patrons together safely in this new world we find ourselves living in. The first few weeks, before postponing I Pagliacci, I found myself waking up each day with a brilliant brand new idea. Outdoor opera seems to be in our favor, so we were fortunate to have already planned an outdoor opera performance, but the question became, how do we adjust the original production into these new guidelines?

Well, to start with for I Pagliacci we have cut the chorus and orchestra. The reason for this is two-fold. One, it helps us in rehearsals not have to worry about gathering in a small rehearsal room with a larger crowd, and two, when the city says you are allowed to have 50 people gathering for an event, that includes the people presenting the event. Therefore it doesn't make sense to have a cast and artistic team half the size of the number who can gather. This gives us an exciting challenge to present this opera without the chorus who plays the "onlooking town audience," but the exciting news is that now, YOU, our actual in-person audience becomes the "town audience." This was always our hope in bringing this clown troupe onto the Tennessee Amphitheater stage. We hope to create a feeling that the troupe has just rolled into Knoxville, and is setting up their "stage" for the evening's performance. John David Nevergall who is singing the lead role of Canio is one of the best tenor/actor combinations I have witnessed in an audition. I can not wait to perform with him and for you to hear and see his talent!

Once Pagliacci was rescheduled it was time to take a look at our upcoming season. We did have to postpone our original Fall production of Dido & Aeneas, which was originally on the docket for early October, however, due to the postponement of I Pagliacci it became clear that this production would need to be rescheduled as well.

As I began to look at replacing our larger Fall production one thing was for certain, I wanted to have a small cast. I thought about revisiting and re-producing one-person operas that could be filmed onsite, like The Human Voice & Bon Appetite, that take place in a living room & kitchen. I've also always wanted to have a Telephone Telethon where we perform Menotti's The Telephone as a filmed production and have callers accepting donations throughout, as a fundraiser. Even Douglas Moore's Gallantry would be wonderful filmed as a soap-opera, it already has built in operatic commercials. However, when we began to re-open the city, and it became clear that as a country we would try to integrate back into our "new normal," we decided that online only might become weary to our audiences.

Our plan is to perform operas with smaller casts and musical ensembles in larger venues than we would normally perform in. With limited seating available, this allows us to accommodate a socially distant audience. Our three main stage productions, Winterreise, Royal Flush, and Tosca will have in-person and online performances and we will be offering tickets to both. Tickets and online performances will be sold through a new platform called ViewStub, which allows us to sell tickets to our streaming performances as well as our in-person performances.

The first two selections are for smaller casts and piano only, and are easily able to be cast locally. This is important, because we will not be having people from around the country traveling into our community and potentially bringing covid from another location, or catching it on the plane. We are so fortunate in Knoxville to have an array of talented and professional singers, especially women.

First up is Winterreise by Schubert. In February, tenor, Blayne Ziegenfuss had reached out to me about Marble City Opera hosting a performance of Winterreise, and while originally I had thought it would make a nice concert addition to our season, I decided this was the perfect opportunity to stage the piece as a monodrama and use projections to help tell the story. We are thrilled to be telling this story at First Baptist Downtown Knoxville in their Fellowship Hall, which is already set up with a projection screen! The room is big enough to easily seat 200, so we are confident we can create enough physical distance between our patrons and performers.

Next up will be a World Premiere of Royal Flush by Frank Pesci. This opera is for a cast of five and piano. The five women are playing poker throughout so, originally, I was hoping to produce this opera as a poker event and incorporate game tables for the audience as well. While we won't be able to achieve that, I know this comedy will be well received next spring, and we will be offering four performances at the Old City Performing Arts Venue which also seats 200.

Hopefully, by our final production, Tosca we will have a vaccine for Covid, because this is going to be a truly exciting way to see this traditional opera. Act I will begin in the cathedral, and the audience will follow the action to the great hall for Act II, and the courtyard for the dramatic finale in Act III. My original intention is for this opera to be fully immersive, so we will keep our fingers crossed that it can continue as planned, but have no fear, I do have a back up plan in tact!

No doubt we will continue online interviews with casts and directors throughout the season and continue to provide performances online like our most recent "Pint Sized Opera Concert." All in all I believe we have an exciting plan to bring opera in a new way to the community of Knoxville and beyond. The technology allows us to reach our Knoxville audience in the comfort of their own home, if they do not feel comfortable to come in-person, and it allows us to reach an even wider audience all over the world. We hope that you will join us for our performances whether that is in-person or online. I can't wait to share the music and story telling with you. 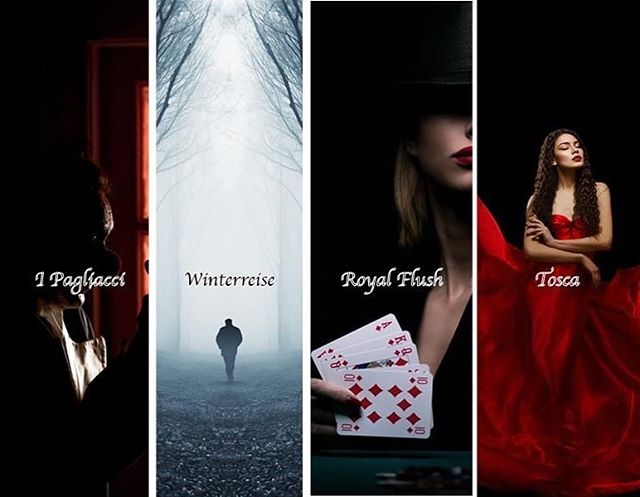 This song cycle is based on 24 poems by Wilhelm Muller will be performed as a monodrama with staging and video projections to help tell the story from the point of view of the wanderer who begins a long winter journey after his beloved falls for another.

Five women play poker – badly. As four of them try to exploit each other’s “tells”, the nature of their relationships comes to light. At the showdown, their mutual bonds and vulnerabilities are laid bare, as the fifth woman pegs them all and runs the table in a hilarious and heartwarming fashion

Not your traditional viewing of Tosca. MCO will be producing this classic in a non-traditional way. Act I will begin in the cathedral, and the audience will follow the action to the great hall for Act II, and the courtyard for the dramatic finale in Act III.